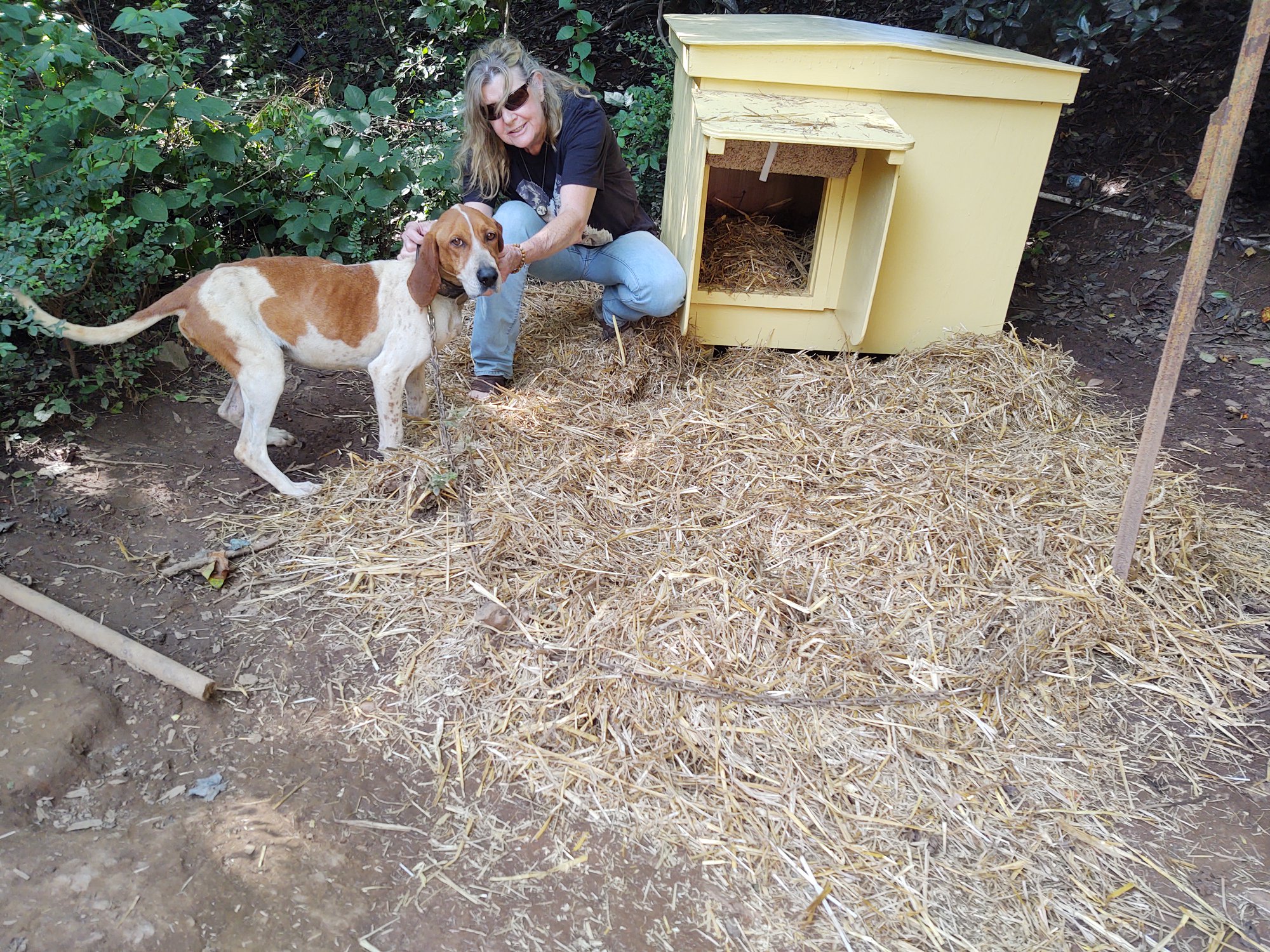 Brenda Nash found her calling in life, and it came in the form of man’s best friend: a dog named Dixie.

Nash founded Habitat for Hounds, an organization that strives to improve the quality of life for dogs by offering dog houses, at no charge, to owners who are financially unable to provide one on their own.

“It started because there was this dog, Dixie, and I passed her every time I went to work,” Nash said about what inspired her to pursue the cause.

She said that the conditions Dixie was living in were less than favorable, and she wanted to take action to improve the dog’s quality of life as best she could.

“She needed something desperately,” Nash said about Dixie. “I figured I’d buy her a dog house.”

Once Dixie received her dog house, Nash took pleasure in knowing that the dog had shelter to stay safe and warm.

“I would drive to work in the morning and I would see her head poking out of the dog house,” Nash said as she grinned from ear to ear.

But she knew that Dixie wasn’t alone and that there had to be more dogs in need, so she took action and Habitat for Hounds was born.

“I decided that there has to be other animals in her condition who need homes,” Nash said. “A lot of times we’ll see dogs in that situation that don’t have adequate shelter at all.”

She began supplying dog houses where they were needed, primarily in Rabun County and Macon County (N.C.).

The first donation received was $100 and it took off from there, with the organization having supplied about 250 dog houses since 2010.

Nash has always been a lover of animals and credits her grandmother as the inspiration behind it.

“Dogs have been my life since I was a kid,” Nash said. She said that her grandmother was an avid dog rescuer.

“She rescued puppies all over the state,” Nash said of her grandmother.  “She was my first influence as far as dogs are concerned. She has inspired me to continue rescuing as an adult.”

A match made in heaven

Nash is a veterinary assistant at Rabun Animal Hospital, and a chance encounter with Ervin Leonard in the lobby one day many years ago brought two heads together for the cause of helping animals in need.

“He’s the one who makes our dog houses,” Nash said of Leonard. She said that “it was pretty miraculous” the way it turned out.

Nash explained that she felt compelled to approach Leonard in the lobby and begin telling him about her experience helping animals in the community.

She said she stared in disbelief when Leonard told her, “well, you know, I make dog houses. I have my own design now.”

Nash said that there was something in her soul that drew her to Leonard that day and they’ve been partners in compassion ever since.

“This whole thing is just God-sanctioned,” Nash said. “I just knew that I was meant to do this. It was a calling. That God was going to take care of it.”

Dogs have been a passion for Leonard as well, and he recounts his days as a repair man traveling on the road, usually on I40 and I75, every day. He said that he would often see dogs wandering on the interstate.

“I would always stop and catch them and if I couldn’t find their owner I would keep them,” Leonard said.

He began making houses for the dogs he collected and had gotten to a point where he had built a lot of them.

“And that’s how it started,” Leonard said. He said he would continue building houses for all of the dogs he brought home. He said he’s been building them since about 1990.

Leonard said that the dog houses are made out of wood and insulated, as well as rain-proof and wind-proof. They come in sizes small, medium and large.

“Plastic houses and barrels always have water in them,” Leonard said about why it was best to make them out of wood.

The bottom of the dog house is lined with wheat straw as a bedding and the roof is removable so that the bedding can be changed easily.

Leonard said he uses rolled-up carpet as a door for the dog house, and there is a velcro strip attached to it so it can stay open in the summer.

He said he is thankful for the generous donations of Mr. Bob’s Carpet Outlet in Franklin, N.C. “He [the company] gives me all these carpet scraps for free that he usually sells,” Leonard said.

He said that Lowe’s gives him a good discount on supplies, and that paint for the houses is donated by a company which wishes to remain anonymous.

Leonard said that it takes about two-and-a-half days to build one house, taking into consideration that the glue and paint have to dry.

He said that a house properly taken care of can last about 20 years. Placing the dog house in the shade is one way to increase its life expectancy.

Leonard said that before showing up to anyone’s property with a dog house, he consults with the owner and asks if they would be interested in a free dog house.

“We first just talk to them,” Leonard said. He said that when he sees a house in need, he approaches with a brochure about Habitat for Hounds and asks if they are interested.

“Some of them are almost in tears,” Leonard said of the owners’ reactions to the gesture. “Some of them don’t have the means to have a dog house.”

He said that seeing that reaction makes his whole month.

“When I drive away from a place, where I knew before my arrival a dog was cold and wet, I know when I go to bed that night the same dog will be warm and dry,” Leonard said. “I can live off of those emotions for weeks.”

Nash said that Habitat for Hounds is in the process of becoming a 501(c)3 nonprofit and hopes to get the designation soon. With that comes more opportunities for donations, she explained.

“All of this has strictly been by donations,” Nash said about the organization’s contributions thus far.

Nash said that the next step is working toward providing kennels to dog owners in the hopes of encouraging them to interact more with their animal.

“It’s really a calling,” Nash said about helping animals in need. “It’s what I’m meant to do.”

For questions and more information about Habitat for Hounds, email Brenda Nash at  1stoney1992@gmail.com