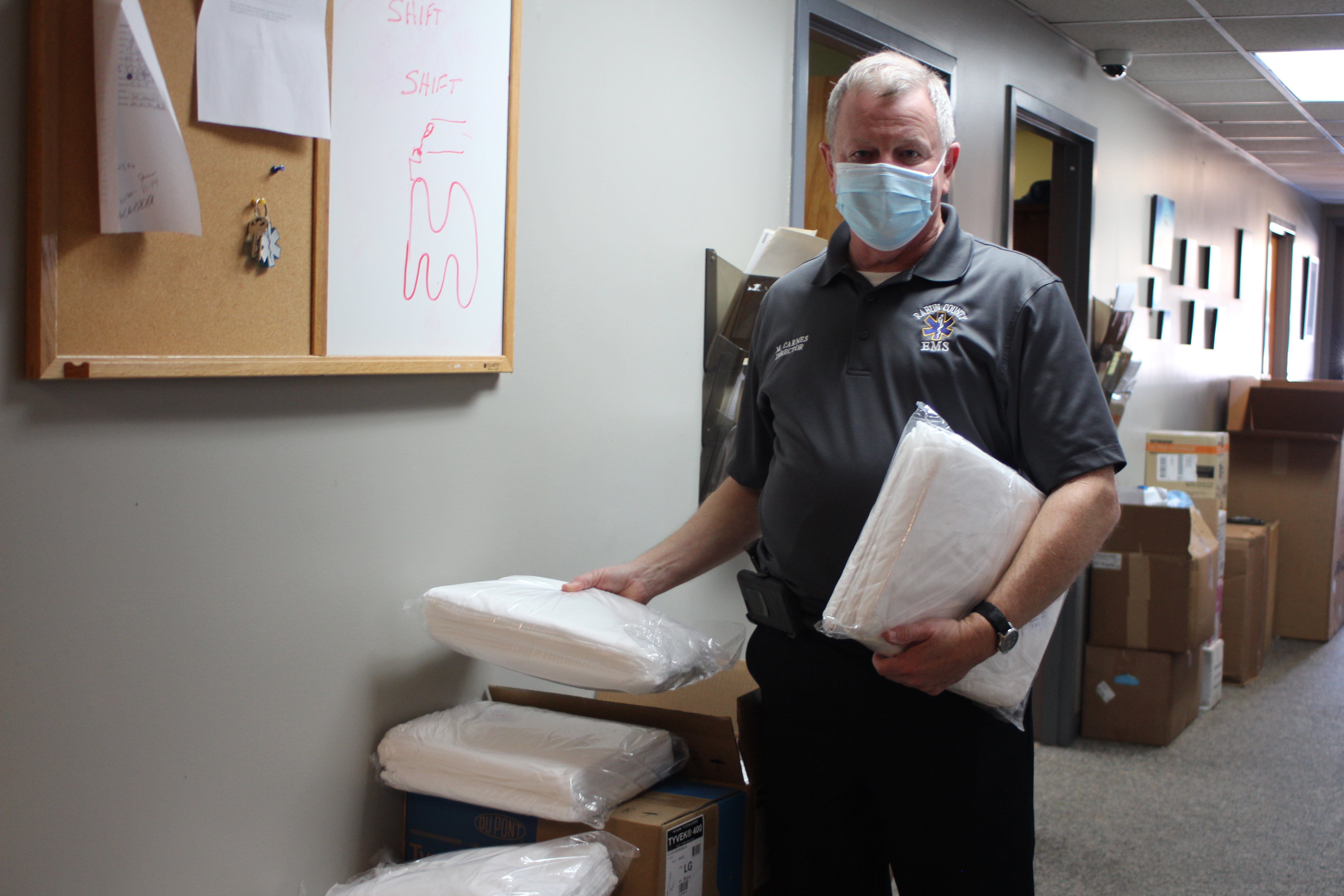 The coronavirus pandemic has affected everyone in one way or another.

With infections rising in record numbers every day, emergency medical personnel have been on the front lines helping others at a great risk to their own health because of increased chances of exposure.

Rabun County Emergency Medical Services (EMS) is feeling the weight and fatigue of the effect of the coronavirus pandemic in the community.

With increasing call volumes and added safety measures that delay response times, personnel grapple with how to boost morale, protect themselves and their families while fulfilling their commitment to helping those in need.

"Our call volume right now is what it is in the summer," said Mike Carnes, EMS/911 director for Rabun County.

He said that the call volume increases during the summer months every year.

Carnes said that EMS is receiving 55-70 calls a week, with three-quarters of those relating to COVID-19.

He said that they treat patients often with symptoms of difficulty breathing and low oxygen levels.

Because of the increased volume, Carnes said that EMS is experiencing longer wait times when transporting patients to the emergency room.

"We're finding ourselves having to wait at the ER longer for them to have a place to put a patient," Carnes said.

He said that the wait could be as long as two hours and that this ties up an ambulance and personnel longer than usual.

This impacts the number of ambulances in service ready to respond to other calls.

Carnes said that when EMS arrives at a hospital, they are sometimes diverted to a different hospital because no beds are available.

Carnes said that this ties up an ambulance even longer, especially if the patient is transported out of town to somewhere like Northeast Georgia Medical Center in Gainesville.

Chad Black, director of the EMS Association of Georgia, was quoted in a recent article by The Atlanta Journal-Constitution expressing concern about an overburdened hospital system.

"I don't know where our breaking point is, but I feel like we're getting very close," Black said. "My concern is we have not (yet) seen the potential surge from Christmas and New Year's. We have no capacity now and if it gets worse, what do we do?"

Rachel Cowart, chief nursing officer at Mountain Lakes Medical Center, said that because of lack of bed availability at other hospitals, they are not transferring patients as often.

"We're keeping a higher acuity of patients," Cowart said. She said the hospital is holding and treating patients that under other circumstances might have been transferred.

She said that Mountain Lakes Medical Center has been working closely with Rabun EMS and Captain Trampes Stancil.

"I think we've got a decent cadence," Cowart said about the working relationship. "We're trying to utilize the resources from the county."

Stancil said that patients who are triaged and often would be transported to a hospital in another county, such as Gainesville, are being taken to Mountain Lakes Medical Center for treatment.

Stancil said this way more ambulances stay in the county instead of being tied up elsewhere.

He said that Rabun County has an Intergovernmental Agreement with Habersham County, Towns County and Macon County (N.C.) where they can assist Rabun County with responding to calls and treatment of patients if needed.

Stancil said that EMS is making it a priority to send anyone with COVID-19 symptoms to the closest emergency room.

Cowart noted that currently Mountain Lakes is not at capacity and can take patients, contrary to hospitals in neighboring counties.

“We do have bed availability," Cowart said. "We've been able to manage patient flow well enough.”

Additional steps when responding to calls

In addition to longer wait times, Carnes said that there is also a delay in the time responding to a call because of the extra safety precautions and Person Protection Equipment (PPE) they have to wear.

They have to wear a contact precaution gown, gloves, an N95 or N100 respirator mask, and a face shield among other PPEs.

“It’s causing a 3-5 minute delay for some of the calls," Carnes said.

All patients transported in the ambulances are required to wear a mask also.

Stancil said that the EMS philosophy is "don't enter a scene unless it's safe." Because of that, extreme precautions are taken with every call and transport.

"We treat everyone as though they’re infected (with COVID) until proven otherwise," Stancil said.

Carnes said that 911 Dispatch has been trained to ask callers if they have COVID-19 symptoms or if they have been exposed to anyone who has the virus or any symptoms.

This way dispatch can update medical personnel as they respond to the call.

"Dispatch has done an excellent job at asking those questions," Carnes said.

Carnes said that if able, the patient needing assistance is asked to meet medical personnel outside in an effort to limit exposure to closed spaces that increase the likelihood of virus transfer.

Carnes said that after every call, the ambulance is transported back to the station for decontamination.

All equipment used is decontaminated as well.

Stancil said that personnel are even taking measures to wash their clothes and uniforms at the station so that they do not expose their families to the virus.

Currently, Rabun County EMS is responding to all 911 calls. This is unlike many other counties which have had to prioritize which patients to transport and which to leave behind.

However, he said that the call volume is only increasing and he fears that they too will have to start prioritizing patients if it continues at this rate much longer.

The morale of EMS personnel has also changed amidst the pandemic.

“I’m starting to see the fatigue of having to handle so many COVID patients," Carnes said. He said that this is understandable considering the stress and logics associated with every call.

"I think our staff is very resilient and they have done an awesome job," Carnes said.

Stancil said that he feels the department has been well prepared.

"Our staff has been awesome. I couldn't be prouder of how our personnel can handle it," Carnes said. "Because our personnel have handled this like champions."