By Megan Broome and Wayne Knuckles 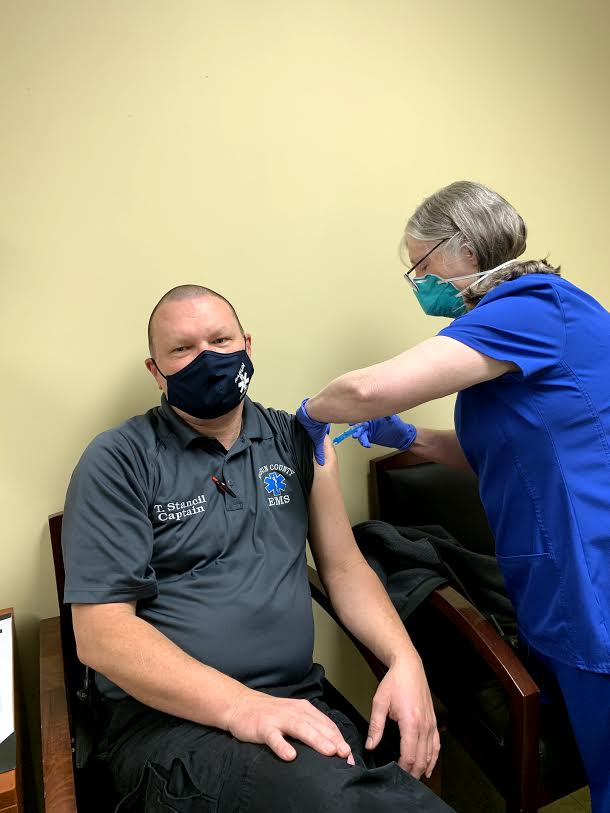 CLAYTON—On Tuesday, Rabun County reported the second-highest rate of COVID-19 community spread in North Georgia, and one of the highest rates in the state.

So far, 17 Rabun County residents have died from COVID-19, eight females and nine males, ranging in age from 37 to 90-plus years old.

The percent of COVID tests returning positive spiked at 50 percent Tuesday, with a 7-day average of 27.9 percent.

Numbers above 5 percent positive are considered signs of significant community spread, which means members of the community are giving the virus to one another.

With those numbers, it’s no surprise that local health officials were very happy to begin receiving the first immunizations against the disease in the past week.

“We’re excited,” said Rachel Cowart, Chief Nursing Officer at Mountain Lakes Medical Center (MLMC). “Our hope is that this is the first step in the end of all of this.”

Mountain Lakes, the Rabun County Health Department and MedLink all began distributing the vaccine to front-line health care workers in the past week.

There’s still no word on when the vaccine might be made available to the general public.

“We don’t have an exact date for that,” Cowart said. “The Centers for Disease Control and the (Georgia) Dept. of Public Health will set guidelines for the next stages of getting the vaccine out to the public.”

MLMC had 100 doses of the Moderna vaccine on hand Tuesday, and was expecting another 100 doses “any day now.”

Moderna is one of two COVID-19 vaccines approved for use against the virus, along with one made by Pfizer.

“The Moderna was much easier for us to store,” Cowart said.

She said that the Moderna vaccine comes frozen and once thawed, it has to be used within 6 months.

Those administering the vaccine had to be updated on education requirements surrounding storage, handling and administration of the vaccine, Cowart said.

A second dose is administered in 4 weeks.

Cowart pointed out that Mountain Lakes has the same medicines and treatments for COVID as any other hospital. She said that people will receive the same therapeutics here as they would in a city like Atlanta or at another hospital.

“All the medicines and treatment algorithms that are being used in larger cities, we are also using,” Cowart said.

Cowart, Ingram and Dr. Guy Gober are among the first healthcare workers to get the vaccine at Mountain Lakes.

How does it feel when being injected the vaccine?

“It doesn’t hurt as bad as the flu shot,” Ingram said.

“This vaccine is incredibly important in slowing and stopping the spread of COVID-19,” Cowart said. “The technology is not new and it has been extensively studied. We’re excited to be among the first to get it.”

Cowart said that if Mountain Lakes uses all 200 vials, they can reach out to the division of public health for more.

“We keep in constant contact with them,” Cowart said. She said they will continue to look to the department of public health for guidance.

Some Rabun County First Responders have received the vaccine from the local health department.

Captain Trampes Stancil of Rabun County Emergency Services said he received the vaccine along with a couple other emergency personnel.

“I originally was torn about whether to get the vaccine,” Stancil said.  “The more I studied it and the more research I did, the more I decided I wanted to go that route.”

He said that the vaccine is voluntary for anyone at Rabun County EMS and he is not requiring that everyone in his department get the vaccine.

“The health department is giving the vaccine to health care workers identified in the CDCs first phase,” said Dave Palmer, public relations officers for Georgia Department of Public Health (GDPH) District 2. “The vaccine is given by appointment.”

Palmer said that there is no cost for the vaccine for any individual.

“The vaccine is safe and has passed clinical trials,” Palmer said.

As of Tuesday, Rabun County had reported 990 cases of COVID-19, including 187 new cases in the past week, according to GDPH.

MedLink officials did not respond to a request seeking comment as of Tuesday afternoon.

Nursing homes in Georgia began receiving the first wave of COVID-19 vaccines on Monday, bringing relief to the state’s most vulnerable group of people who have been hit hard by the virus for more than nine months.

About 39,000 doses of the vaccine made by pharmaceutical company Pfizer have shipped to elderly-care facilities as well as CVS and Walgreens pharmacies, which are partnering with the federal government to send doses directly to nursing homes, said state Public Health Commissioner Dr. Kathleen Toomey.

Staff at nursing homes who serve as “the firewall” protecting elderly residents will likely be vaccinated first, Toomey said during a news conference at Pruitt Health’s elderly-term care facility in Gainesville.

She noted nursing-home residents account for 37 percent of Georgia’s deaths stemming from COVID-19, despite making up just 5 percent of the state’s overall positive cases.

“We hope with these vaccines we will begin to change those statistics and save lives,” Toomey said.

Toomey also announced the state has set up a new vaccine-focused hotline for Georgians to ask questions about when they will get the vaccine, what the difference is between the two brands and how the vaccines are safe. The hotline number is 1-888-357-0169.

So far, Georgia has been allocated 268,000 doses of the Pfizer vaccine and 234,000 doses of a vaccine produced by pharmaceutical company Moderna. Health-care workers have been first in line to receive the vaccines starting earlier this month. More than 26,000 vaccines have been given as of Sunday.

Gov. Brian Kemp noted more than 95 percent of all elderly-care facilities in Georgia have signed up with CVS and Walgreens for the direct-distribution program, which will cut out an extra step of routing vaccines through state officials.

“We are eager to see the vaccine make its way quickly and safely to our most vulnerable and to those brave Georgians who are giving them world-class care,” Kemp said Monday in Gainesville.

The first vaccine shipments come as Georgia continues seeing COVID-19 positive cases and hospitalizations spike amid the winter holiday season. Case rates have now shot far above the prior transmission peak seen in July with around 5,000 new positive cases daily in recent days.