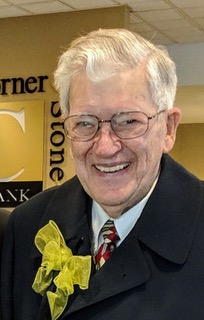 Joe grew up in Georgia and never met a stranger in his life. He could light up a room with a good story, witty joke, or life lesson – often combining all three into one long tale that left everyone feeling a bit more cheery. He wanted everyone to be their very best and did everything he could to help them get there.

Inducted into three basketball Halls of Fame, he could beat anyone in a game of pick-up well into his 70s and he knew and loved the game better than most. He was a jack-of-all-trades and had retired as Athletic Facilities Director at Washington and Lee University after working at Burlington for many years.

Joe was a member of Manly Memorial Baptist Church and a strong Christian role model. He was a loving and attentive son, brother, husband, father, grandfather, great grandfather, uncle, friend, coach, and so much more. He will forever be remembered for his unconditional love of his family. As a friend has said, this world is better for his life, poorer in his passing, but he is crowned and covered in the Glory of God.

The family suggests that contributions can be made to the Manly Memorial Youth Fund c/o CornerStone Bank, N.A., 54 South Main Street, Lexington, VA 24450.