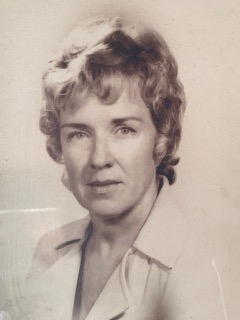 Mary Cathryn White Suddeth died August 5, 2019, at home in Clayton, Ga., at the grand ol’ age of 89.
She was predeceased by her husband Robert “Bob” Minter Suddeth in 2007, and by her daughter Susan Ayers in 1995 and son Randy (Jewel) in 2015. She is survived by her son Rick (Catherine), daughter Lisa Buchanan, and son Jim. She is also survived by her seven grandchildren, five great grandchildren, and one great-great granddaughter.
Mary Cathryn was born in Delray Beach, Florida, on September 19, 1929, to Carl and Effie White. She loved her childhood there, which she described in detail in Delray Beach: A Renaissance by the Sea, by Sandy Simon. She also enjoyed visits to Alabama to see relatives “on the farm.” There her love of all God’s creatures began and continued through her life.
In the late 1940s, her father built a cabin in Clayton so their family of three could enjoy the cooler summers of the Georgia mountains. They moved permanently to Clayton in 1948, and in 1949 Mary married local businessman and retired USN lieutenant junior grade Bob Suddeth.
Mary and Bob lived in Clayton until 1954, when they moved to Summerville, South Carolina, with their young children Randy and Susan. Their family grew over the years to include siblings Rick, Lisa and Jim, whom they raised in Summerville.
In addition to family, church, and school activities, Mary’s Summerville years also included trips to the Holy Land and elsewhere, deepening Mary’s Christian faith. Friendships from that time remain until this day.
Mary and Bob remained in Summerville until 1994 when Bob had a stroke. They then returned permanently to the cabin in Clayton, where Mary cared for Bob until his death and helped care for her grandsons as they grew. For a time, she also volunteered at the Rabun County Historical Society, work she enjoyed for an organization of which she was proud.
Mary loved the Lord, her family, the many “critters” she adopted and cared for, and her Georgia mountain home. Her family deeply mourns her passing.
Pruitt-health Hospice provided 16 weeks of invaluable services, delivered by professionals with a personal and loving touch. We, Mary’s family, will be forever grateful. In lieu of flowers, please consider a donation to Pruitt-cares Foundation at www.pruittcares.org.
Graveside Services were held at Bethel Baptist Church Cemetery Friday, August 9, 2019 conducted by Layman Lloyd Hunter.
Hunter Funeral Home is in charge of arrangements.
An online obituary and guest register is available at www.hunterfuneralhomega.com.