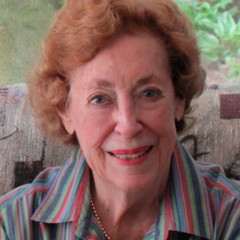 Mary Ella McLendon McManus, known to all as MaryMac, passed away peacefully on February 9, 2021 in her 95th year.

She was born August 17, 1925 in Baltimore, Maryland to Thomas and Lula McLendon.  The McLendon family returned home to Atlanta, and MaryMac grew up living in the Alhambra Apartments on Peachtree Road, which was considered the edge of town at the time.  MaryMac graduated from North Fulton High School in Atlanta, Georgia in 1943.  Afterwards, she attended Wesleyan College in Macon, Georgia.  MaryMac established and maintained friendships during her time at both North Fulton High School and Wesleyan that lasted throughout her life.

MaryMac married Clifford Braswell McManus, Jr on June 28, 1947.  Clifford preceded her in death in 2000.  Through Clifford’s position with Georgia Power, the couple had the opportunity to live in several cities in Georgia, including Athens, Valdosta, and Sandy Springs.  Wherever they settled, the couple made lifelong friends, hosted many parties, and enjoyed raising their two sons.  MaryMac volunteered to work at local hospitals through the Hospital Auxiliary as a ‘Pink Lady’ wherever she lived.

In the late 1940’s, Clifford and MaryMac had the good fortune of attending a house party hosted by Jim Pierce on Lake Rabun in Rabun County, Georgia.  That was when MaryMac fell in love with the lake and the people living there.

Clifford and MaryMac obtained their own lot on Lake Rabun and began construction on a one room cabin in Lakemont in 1953.  The cabin became a long-time construction project for MaryMac and her two sons.

MaryMac’s love of the lake was immeasurable. She would pick up her sons on the last day of school each year, with the car packed and her cats in tow. They would make the trip to the lake and would not return until school started the

While living in Lakemont, MaryMac began her support of Foxfire.  In appreciation, MaryMac received the first Foxfire President’s Award for her “sustained dedication and commitment to Foxfire”.  MaryMac became an active volunteer on the community board.  She chaired several annual community recognition events, and assisted with several Foxfire Fall Festivals.

MaryMac loved living in Lakemont.  She was happiest when the power was out in the winter, and she could curl up next to the wood stove with her cats and a good book.  Her annual parties at her lake house were legendary.  The support from her friends in Lakemont allowed MaryMac to remain independent and live in her beloved home until she was in her 90s.

MaryMac is survived by her sons, Clifford Braswell (GayLynn) McManus, III and Thomas Taylor (Anna) McManus, and her grandchildren, Brian (Jessica), Katie, Emily, and Julia.  All of these she loved and touched deeply.