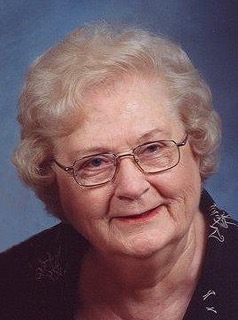 Samuel B. and Sally (Stumbo) Hamilton, of Pikeville, Ky.  She was preceded in death by her loving husband, Roy C. Hosford, whom she married in 1948;  sisters, Opal and Ruth Hamilton, and Jean (McCarty), and brothers, Denzil, Ralph, and Samuel Hamilton.

She is survived by a daughter, Donna Milam Roberson and her husband Ronald of Clarksville;  son, Wayne B. Hosford of West Palm Beach, Fl.;  grandson, David Milam of Rabun County;  great-grandson, Rocker of Rabun County;  several beloved nieces and nephews.

Shirley graduated Pikeville High School in 1939, and worked in her home state of Kentucky, and later Tennessee and North Carolina before moving to Florida during WWII.  Along with her husband, she raised two children in Miami, Fl., while working as manager of the Miami Fireman’s Federal Credit Union.  In 1979, the Hosfords retired to north Georgia, near Clayton, for 32 years until moving to be near family for a transition to assisted living in Dublin.

Shirley was known for her kindness and pleasure in helping others, her sense of humor and self-effacing remarks, her artistry in painting and quilting, both of which earned her awards through the years.  She was an avid reader, theater and concert-goer.  She loved cooking and entertaining guests in her home, was active in her church, Clayton Baptist Church, several community organizations, and a long-standing volunteer for the local library in Clayton.

Although she lived in many places, her love for the flora and fauna of the north Georgia mountains made her one of the area’s happiest residents.  A loving, while outspoken and independent person, she was first and foremost a lady, and a great friend to all.  She will be ever missed, and long remembered for her life journey, her accomplishments, her strength of both character and spiritual faith.

A private Celebration of Life will take place at a later time. Stokes-Southerland Funeral Home of Eastman has charge of the arrangements.