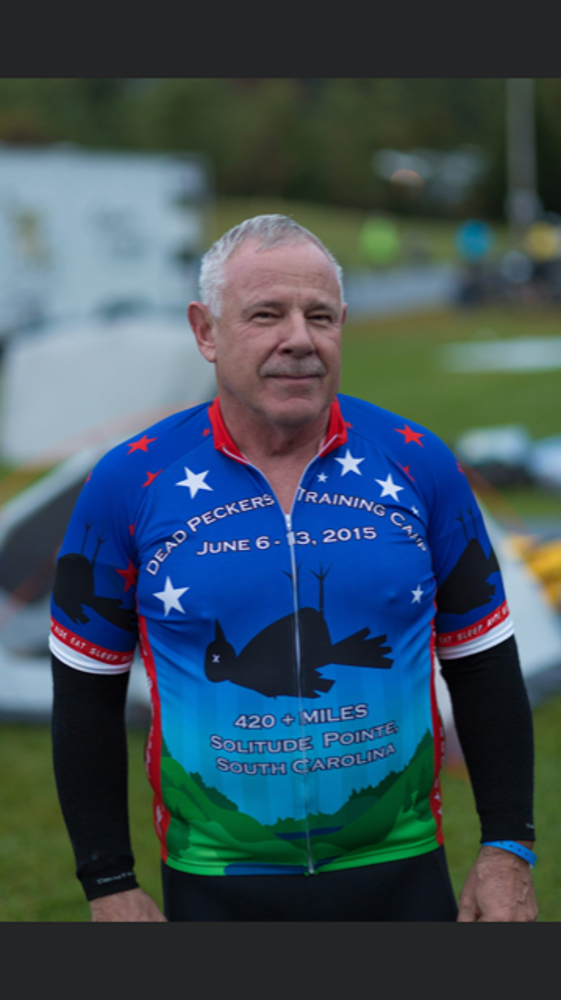 He was an avid cyclist, a devoted husband, father, and PaPa, and friend, cheerleader, and coach to everyone he met. Terry loved connecting and sharing all of his loves with everyone he met through pictures, support, and frequent Facebook posts.

Terry is survived by his wife, Jaye Masters; his children, Katie (Cody) Chapman and Thad (Rachel) Tuck; his beloved grandsons “The Colester” and “Jack-Jack,” as well as his mother, Chris Allen; brother, Tommy, former wife Nancy, stepson Steve Andrews, and his beloved dogs.

Terry retired from teaching and coaching in 2005, but was still on the sidelines supporting Rabun County High School athletes as they competed across the state. He also used his free time to support and connect with everyone he met. Terry had a great love for music and movies, Werther’s Originals (the mark of a true “PaPa”), buying things in bulk for reasons his family still does not understand, high-octane coffee, Yuenglings, and a daily can of V-8.

He was a University of Georgia graduate and could be found during the fall cheering on the Dawgs and making sure his grandsons did not like those dreaded blue and orange colors. One of his other pride-and-joys was his Porsche 914, which he drove weekly so that it would not become a “static display” (the same reason he gave for exercising constantly).

Terry loved connecting with former students from across the state and beyond and always stayed up to date with the goings-on in their lives. He spent his summers participating in BRAG (Bicycle Ride Across Georgia), for which he was constantly training. When it came to his grandsons, though, he had none of that disciplined “wheel power,” taking them to the playground or on bike rides, eating at Zaxby’s, and spoiling them with dirt worm donuts (much to their mother’s chagrin).

Terry loved big and lived big and will be terribly missed by all who knew him (except for the people of Iceland, who are probably still in recovery from some of his colorful comments during their trip).

In lieu of flowers, please consider exploring the outdoors by hike, bike, or kayak, or making a donation in Terry’s name to the Rabun Aid Program, Clayton First United Methodist Church (P.O. Box 703, Clayton, Ga. 30525), or a charity of your choice.

We will be celebrating Terry’s life on Saturday, Feb. 29, at the Family Life Center of the Clayton FUMC with a visitation at 10 a.m. and service at 11 a.m. The family will receive visitors with a reception following the ceremony.