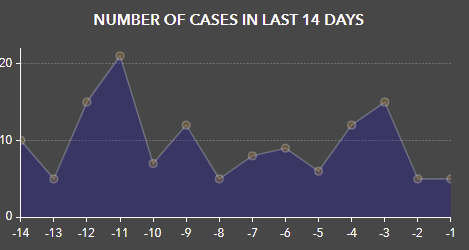 The rate of spread for COVID-19 in Rabun County dropped considerably in the last week, according to data released Tuesday by the Georgia Department of Public Health (GDPH).

The percentage of COVID-19 tests returning a positive result dropped to 8.1 in Rabun County, according to the 7-day rolling average provided by GDPH.

That number is considered a reliable indicator of the rate of community spread. Any number above 5 percent is considered significant.

Is has been as high as 50 percent in the past month.

While that was good news, the latest batch of statistics from Johns Hopkins University show that the fatality rate for Rabun County is currently nearly twice the state average.

Rabun has a fatality rate of 2.44 percent of those who contract the disease, compared to 1.53 percent for the state as a whole.

As of Tuesday, 35 local deaths have been attributed to COVID-19. Five new positive results were reported Tuesday, bring the total number of local cases to 1,437.

The Rabun County Health Department has been joined by Medlink and Ingles in making COVID-19 vaccinations available in Rabun County.

The vaccinations are given by appointment only.

Currently, Georgia is prioritizing citizens 65 and over, health care workers, long-term care residents and staff and public safety workers for the first round of vaccinations.

Georgia has not yet reached the halfway point in giving first doses of COVID-19 vaccines to the roughly 2 million people currently eligible more than a month after the state’s distribution program began, Gov. Brian Kemp said Tuesday.

The number of shots administered to Georgia health-care workers, nursing home residents and staff, first responders and people ages 65 and older has gone up in recent weeks after a halting mid-December start, Kemp said at a news conference in the state Capitol.

“Although we still expect demand to far exceed supply for the foreseeable future, this is no doubt welcome news, and we will work around the clock to get these vaccines distributed and safely administered as quickly as possible,” Kemp said in a statement Tuesday night.

Kemp had earlier on Tuesday said his office did not know when the federal government would allocate more vaccine doses, saying he had not yet spoken directly with the new Biden administration and that he did not expect Georgia’s weekly allotment “to change certainly for the next few weeks.”

As of Monday, nearly 714,000 vaccines had been administered to the initial round of Georgians eligible to receive them, said state Public Health Director Dr. Kathleen Toomey. Health departments across the state have enough vaccines to schedule second doses for people who have received their first, she said.

More than 99 percent of the state’s nursing homes have also been supplied vaccines through a federal partnership with CVS and Walgreens pharmacies, Kemp said. He has set a goal to vaccinate all of Georgia’s nursing home residents and staff by the end of this month.