Glendon Poe
Body
RABUN GAP — The Rabun Gap-Nacoochee football team not only started fast, it started so fast that the officials had to end the game early. Matt Linn threw for 108 yards and three touchdowns, Paul Steidl caught two passes for two scores and the Eagles routed the Greenwood Raptors (S.C.) 41-0 in 19 minutes of their season opener last Saturday afternoon. “It was good to see our team get off to a fast start on Saturday,” coach Shawn Bryson said. “We constantly talk to are players about starting fast and playing with high energy. I'm glad that we showed that we can start fast. It's something that we can continue to build on going forward.” 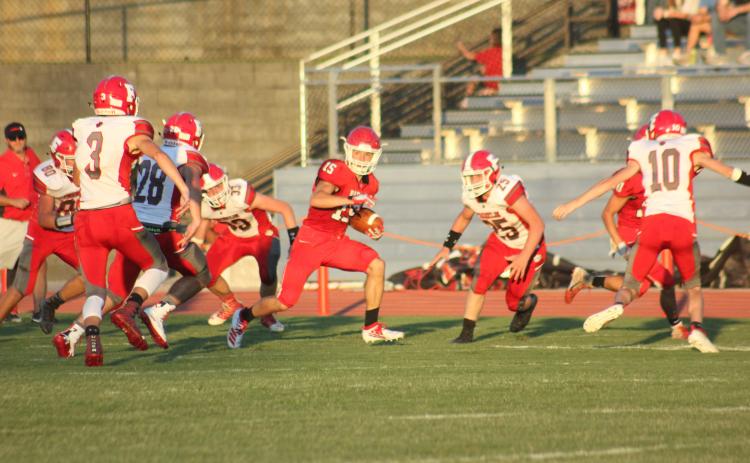 Rabun aims to even series vs. Bremen in Erk Russell Classic

Glendon Poe
Body
TIGER — When the Rabun County football team traveled to Statesboro to open its regular season at the annual Erk Russell Classic last year, it had a lot to endure. Bremen’s defense kept the game gridlocked at 10 and thunderstorms delayed the contest on two separate occasions. The Blue Devils ran the ball inside the red zone and Evan Fuller’s successful field goal kick as time expired sent the Wildcats back to Rabun County with a loss in their first game. 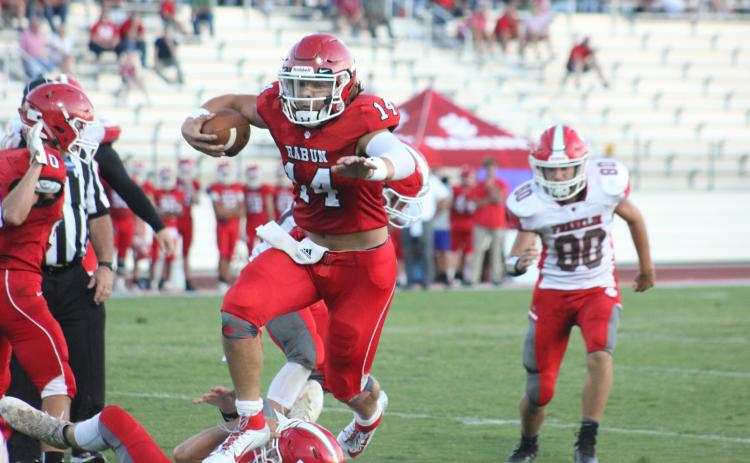 Stockton has 5 TDs, Wildcats roll past Panthers in preseason game

Glendon Poe
Body
TIGER — The Rabun County football team rang its victory bell for the first time this season. Gunner Stockton threw four touchdown passes and ran for another as the Wildcats scored on all five offensive possessions and rolled past Franklin (N.C.) 37-0 in two quarters of a preseason game at Frank Snyder Memorial Stadium last Friday night. “I thought we executed our offense. Each guy did their job and it resulted in some big plays for us, but we still have a long way to go to reach the point we are wanting to get to,” coach Jaybo Shaw said. 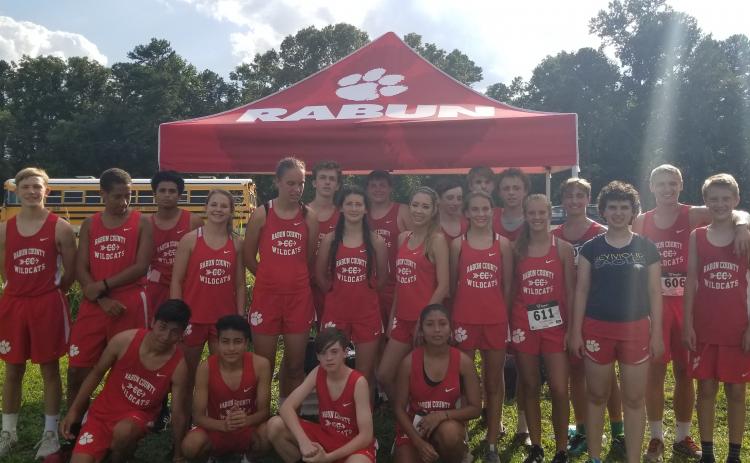 Glendon Poe
Body
TIGER — Rotary Club of Clayton met with Rabun County’s new head football coach and athletic director Jaybo Shaw and toured the school’s athletic facilities during their meeting last Thursday. Shaw, who coaches his first regular-season game as the Wildcats’ leader in Statesboro on Saturday night, talked about his playing and coaching background. From playing quarterback in high school at Flowery Branch to playing collegiately at Georgia Tech and Georgia Southern, Shaw has always been around sports. He knew what career he wanted to pursue when he graduated high school.

News Staff
Body
Rabun Gap-Nacoochee has expanded its sports medicine staff and space to enhance services for the growing number of student-athletes on campus. Jackson Roper will begin as assistant athletic trainer this year alongside Head athletic trainer Mark Green. A native of Franklin, N.C., Roper graduated this spring with his master’s degree in exercise science from Liberty University and earned a Bachelor of Science in athletic training from Western Carolina University. He has been a certified athletic trainer since 2017, and completed internships that placed him in the college and high school athletic settings, as well as performance centers and industrial settings. 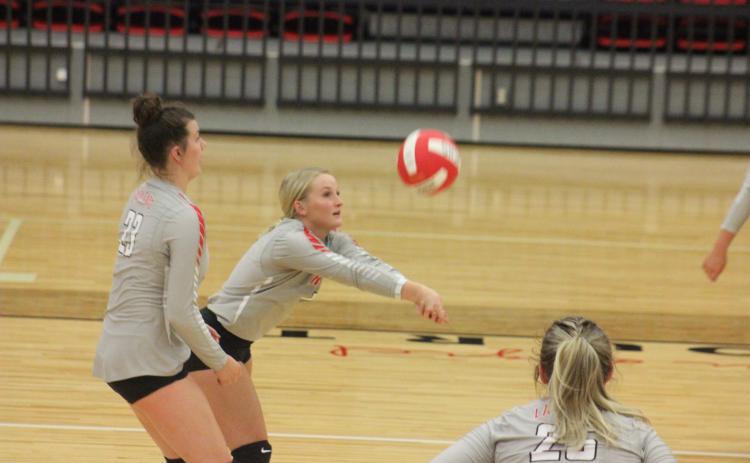 Rabun rallies past Stephens after loss vs. Lumpkin 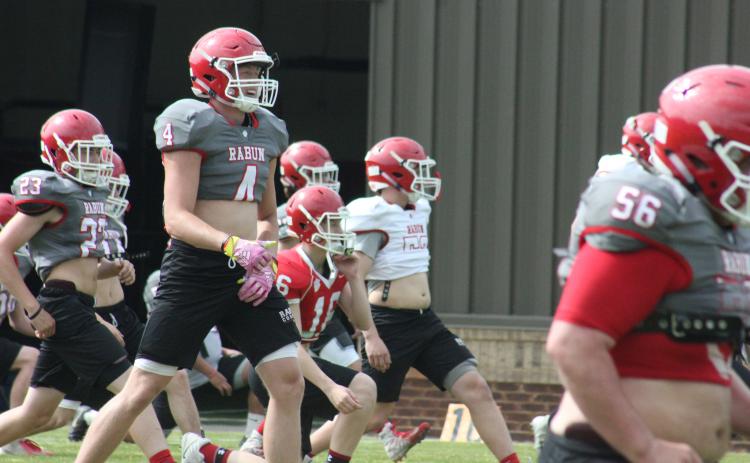 Glendon Poe
Body
TIGER — For first-year head coach Jaybo Shaw, the Rabun County football team’s scrimmage with Franklin (N.C.) has been a part of the program’s preseason since he was hired as an assistant in 2015. The tradition continues. The Wildcats host Franklin for their annual preseason game at Frank Snyder Memorial Stadium at 7:30 p.m. Friday, with the biggest question on Shaw’s mind being: How will the team compete against another opponent in a live setting?

Glendon Poe
Body
TIGER — With 10 runners returning, the Rabun County cross country team starts its season Thursday. The Wildcats visit Tallulah Falls for their first meet, beginning at 4 p.m. “We are excited to see where this team will go for the girls and boys,” fifth-year coach April Adcock said. “It will be a competitive year from top to bottom on who the top seven will be.” 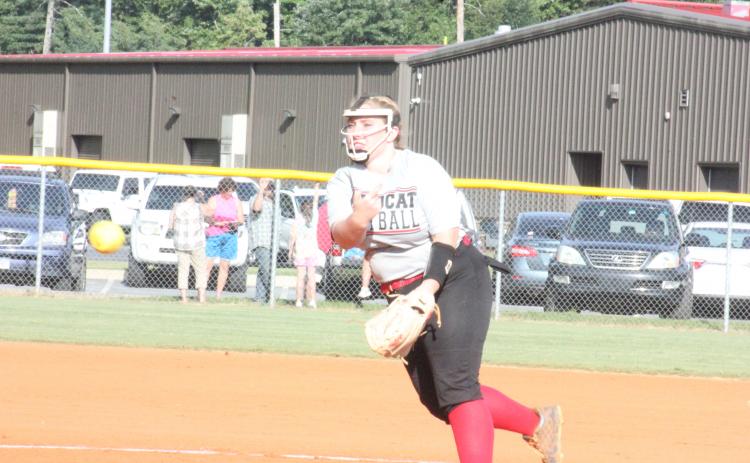