The Rabun County softball team’s playoff run came to an end after a doubleheader loss against the Harlem Bulldogs in Harlem on Tuesday night. 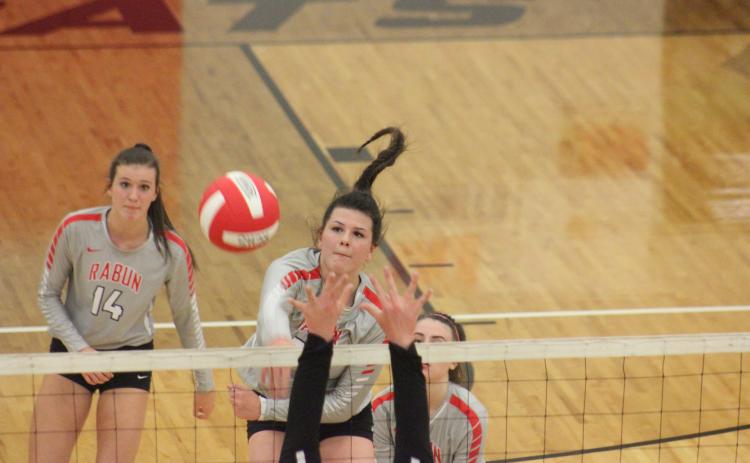 News Staff
Body
The Rabun County volleyball team earned a top seed in the GHSA Class A/AA state playoffs after defeating Union County 3-1 in a best-of-five match for the area championship at Ken Byrd Court last Thursday night. No. 1-seeded Rabun hosts No. 4 Armuchee in the opening round of the GHSA Class A/AA state playoffs at 2 p.m. Saturday. The winner advances to play the Callaway-Johnson winner in the second round at 5 p.m. All matches will be at Rabun County High School. The Wildcats fell behind early in the opening set, but rallied to cut the deficit to 12-10. Destiny Deetz made a kill to bring Rabun within 17-13 and an attack error from Union narrowed the scoring gap to 17-14. Three straight kills from Union extended the advantage to 21-15 and an attack error from Rabun made it 24-16. The Panthers won the set 25-16.

Glendon Poe
Body
RABUN GAP — The Rabun Gap-Nacoochee football team's pass rush harassed Cabarrus (N.C.) throughout the night, keeping the home team out of the end zone in a 43-3 win in Concord, N.C., last Friday. The Eagles' defense finished with 18 tackles for loss, including 20 hurries and three sacks, while allowing just 208 yards of total offense in a fourth straight win. "It was good to see our defensive front being disruptive and getting to the ball carrier," Eagles coach Shawn Bryson said. "We were able to stop the run earlier. We were able to start fast on offense as well. Getting some of our injured players healthy on our defensive line was key also." Niklas Kahrau led the Eagles' defense with nine tackles (six solo), including three for losses. He caused the Warriors to fumble once and hurried quarterback Michael Dickens seven times. Lior Volkov made seven tackles, Victor Omorodion had six tackles, Paul Steidl finished with five stops and Alperen Aras added five tackles for losses.

PREP ROUNDUP: Cats advance to 2nd round of state playoffs

News Staff
Body
SOFTBALL Rabun County: The Rabun County softball team swept South Atlanta (7-0, 7-0) in the first round of the GHSA Class AA state playoffs Monday. Details on the Wildcats’ opening-round victory will be in next week’s edition of The Clayton Tribune. Rabun awaits the winner of the Toombs County-Harlem series. The Wildcats begin their second-round series Tuesday. Courtney Stewart pitched a complete game, allowing two runs on eight hits as Rabun captured the region’s No. 3 seed in a 9-2 victory against Monticello last Wednesday.

Glendon Poe
Body
TIGER — The Rabun County-faithful made a strong appearance for homecoming night, and their football team continued its domination of region rivals. Gunner Stockton threw for a season-high 368 yards and accounted for seven touchdowns in the Wildcats’ 52-10 victory against the Banks County Leopards at Frank Snyder Memorial Stadium last Friday night. “Anytime Gunner gets in a groove throwing the ball, he’s going to be hard to stop,” Rabun coach Jaybo Shaw said. “We have a great group of receivers, a very unselfish group of receivers who catch the ball really well, and I think it shows. He can throw to all four or five of them at any given point, so we’re really proud of our offensive production.”

Glendon Poe
Body
RABUN GAP — The Rabun Gap-Nacoochee football team earned a win in an uncommon way last week: by forfeit. Victory Christian Center was forced to forfeit last Friday’s scheduled game at Rabun Gap due to not having enough players for competition. The result was a win for the Eagles, improving them to 5-2 overall and 2-0 in region play. Now it’s on to the Cabarrus Warriors.

Glendon Poe
Body
The Rabun Gap-Nacoochee football team scored three first-quarter touchdowns and used a stout defensive effort to dominate Hickory Grove Christian (N.C.) 55-0 in Charlotte, N.C., last Friday night. The Eagles (4-2, 1-0 NCISAA Carolinas) shut down the Lions’ offense, allowing only 21 yards. “Anytime you can get a shutout, it's a big deal for the team. It means that our guys were prepared and played hard,” Eagles coach Shawn Bryson said. 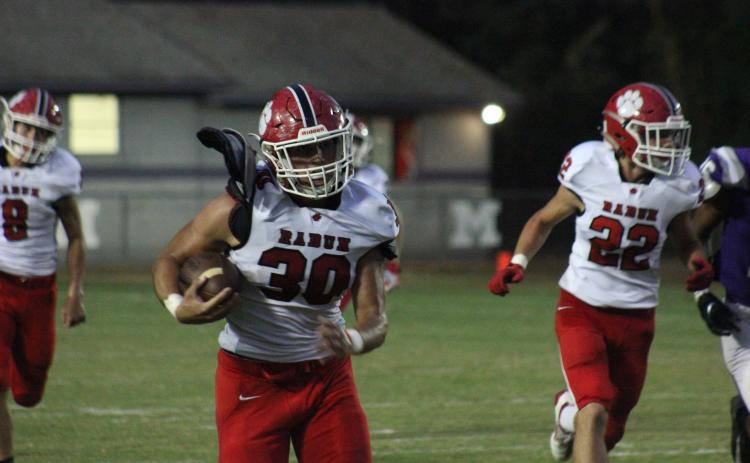 Glendon Poe
Body
TIGER — While the majority of high school offenses use the popular spread scheme, Banks County is one program using the wing-T offense, relying on multiple formations and a four-back rushing attack that depends heavily on play-action passing and misdirection. Rabun County’s defense will take on the Leopards’ misdirection offense for homecoming at Frank Snyder Memorial Stadium at 7:30 p.m. Friday. “I would like to invite all our past Rabun County football players and students to come cheer on the Wildcats. It should be a great environment Friday night,” Rabun coach Jaybo Shaw said.